I started this article in Spring 2012 as the third in our Lessons Learned Series.  Finn’s health declined and his well-being quickly became my only priority when I was not with clients and their dogs.  At the time, I admired my amazing dog for his strength and his lighthearted ways, despite having endured ample hard knocks.  Since he passed on January 8, 2013, I have only grown to treasure his resilience even more as he fought like a devil to stay happy months longer than veterinarians projected.  His tenacity will always be a part of me and I will often think about him when I question whether I can get up after my own stumbles.

Banned and unwanted.  Bred to hunt and labeled “too wild to train”,  Finn was supposed to live in the hunter’s home.  I am sure he raced through the house causing havoc. And, he was attacked so brutally and with such frequency by the other dogs that he was shunned to live alone in a barn. The expense of keeping him became too much and he was not “working” so his owner decided to shoot him in the head if he could not find him a home. My boss at the time was friends with the hunter and was in a panic when I came to work that morning, frantically telling me the story. Without having met or seen the dog, I knew I had to rescue him.  As I drove to pick up the abandoned puppy; I envisioned this downtrodden little guy who would look up with sad eyes as I attempted to show him I would never hurt him. Instead, we opened the barn door and this ginormous puppy catapulted himself at me, knocking me over with excitement and showering me head to toe with slobbery kisses. I was a goner.  I still smile when I think of the sparkle in his eyes and how easily he accepted me as his new mom.  All he knew in his short life was hurt and rejection yet he was willing to give love without hesitation or a need for anything else in return. I may have rescued him  but he sure rescued me that day and so many others since.

The hurt continued. September 12, 2001, I was supposed to be in Paris with my boyfriend at the time.  Still weighed with sadness myself over the horrific loss of so many people, I found solace in a long walk with Finn through Lincoln Park.  We had finished our first training class and made nice progress with his leash walking skills but still struggled when he was REALLY excited.  He saw a dog across the street and flailed about like many young dogs do. He just HAD to say hi to the dog and pulled me into the street to offer an idiodic and exuberant greeting.  I tripped on a curb then heard a crash. I looked up to see a car and no Finn.  Limping and terrified at the thought what I might have seen on the other side of the car, I found Finn shaking and scared on the parkway.  The man offered to drive us to the veterinarian’s office and I called them from the car to let them know we were coming.  We entered to stunned faces because Finn happily walked through the door, wiggling his butt and looking around for anyone to pounce and love on. Physically hurting, he still managed to be happy and welcoming to everyone around him.  I try to remember this in my daily interactions and of course, we focused on his leash skills after that to make sure he was safe.

Nine attacks and the word “walk” still made an old guy to bounce to the door.  Yes, I said “nine”.  It is no secret dogs never liked Finn.  I mentioned attack #2 in my last article, which was followed by: dog jumping through a second story window to grab Finn by the neck; another dog roaming free who pummeled Finn and an elderly man’s dog within seconds of each other; a wayward dog pinning Finn at the dog beach with guardian nowhere in sight and a resource guarding dog biting Finn’s lip after he went for her ball at a daycare, I heard he got her back in the ear.  However bad each of the above assaults were and the behavioral setbacks we had because of them, the last three were the worst.

We were at the surgeon’s for our one-week check up after Finn’s second ACL surgery.  You know how you just “know” something is not going to go well?  I had that feeling.  A man with two dogs did not seem to have control of either nor did the dogs seem to be free of behavior issues. Instead of making my next appointment, I decided to call later and head to the car.  Getting a dog with a bum knee into a car takes patience, finesse and a little muscle. I was bent over Finn, coaxing him to get into a position that I could lift him and I felt the rush and heard the sound at the same time.  One of the dogs we saw in the lobby had pulled backwards out of his collar and blitzed Finn. He looked at me, terrified, as he laid under the snarling dog. I pulled the attacker off by the neck and handed him to his owner. Instead of getting out of there, the guy decided to punch his dog for disobeying him.  No collar, the dog easily broke away and was on top of Finn again growling and biting at Finn’s neck. Seriously! I pulled him away and handed him off again while telling the guy to “get to his car”, not very nicely. I was sure Finn would have to endure another painful surgery.  A few of the staff had come outside to help me get Finn back in the hospital and SOMEHOW he managed to not need another surgery nor additional therapy. I am still not sure how my sweet boy was so strong after enduring so much and they were wonderful with how they handled the attacker’s guardians, as they were clients too.

I took very gentle care of him in the next week and out on a very short walk, I heard a screeching sound from a tree then saw a cat land on Finn’s head, hissing and batting the whole time.  Finn just stood there, helpless.  I peeled the cat off and we went home to nurse both our wounds.  We stayed very close to home the next couple of weeks and I am fairly certain there were lots of belly rubs and treats in my house for a healing Finn.

I was convinced that eight attacks were all any dog could possibly be subjected to.  Well, I wish I was right.  On a beautiful night in Chicago, Finn and I took an extra long walk through the neighborhood and I was lost in thought on how lucky I was when I saw a dog come tearing out of an open door, eyes blazing, headed for Finn. I leaned forward and shouted, “Go, go, go” in my deepest, most serious voice and phew! The dog disappeared. From behind came another dog and he latched onto what I thought was Finn’s leg (the one that had been operated on six months prior). I grabbed the dog in a manner that I knew could possibly cause him to turn and bite me as poor Finn ran in circles, attempting to get away.  The owner finally came out and pulled the dog off, got him inside and drove Finn and I to the Emergency Room.  Again, an injured Finn entered the lobby with such enthusiasm that I had to say, “yep, I’m the one who called” while he simultaneously bounced from one technician to another giving happy hellos to all.

Fortunately that was Finn’s last attack.  However many ordeals he had been through, he still bounded to the door for walks like the world was there to bless him with delicious smells, squirrels to chase and people to let him kiss their cares away.  The little worries that sometimes suck my energy seem to dissipate when I think of how many bad experiences Finn had, yet he was always up for any adventure I offered to him, with a giant smile on his face.  I often had to tell people I did not want him to say hi to their dog because he learned to offer behaviors that appeared approach worthy, but unless I knew the dog and their human very well, it was not worth the risk for me to put him in a position where another dog could attack him.  I still can’t believe how strong Finn was and even as he aged, he still approached everything he did with a smile and enthusiasm. I am so lucky that wild, abandoned puppy stumbled into my world and leaped into my heart.  A dog, an amazing dog has taught me to go for it when fear might easily hold me back.  He will never know how his zany ways and resilience have inspired me to pick up the pieces of bad experiences and head out the door, head held high, for a better day.

The above picture was taken in Lake Geneva, we often took road trips out of the city so he could enjoy walks and swims without my worrying about another dog looking for the canine version of a “kick me” sign on his back. 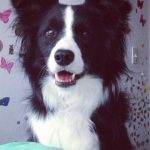 I met this dazzling dog when she was a wee little tyke. Even as a puppy, Kaia carried a lot of weight on her gorgeous … END_OF_DOCUMENT_TOKEN_TO_BE_REPLACED